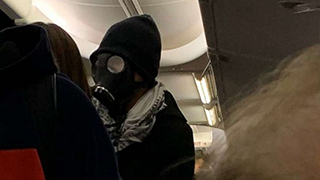 Who is that masked man?

There’s no shortage of passengers and crew wearing face masks these days, in hopes of protecting themselves from airborne viruses. But one pax recently took it a step further.

American Airlines removed a mysterious gas mask-wearing man from a Houston-bound flight and rebooked him on another plane after passengers became panicked, airline officials said.

The presence of the man, whose gas mask completely hid his face, unnerved many of those on board Flight 2212 from Dallas to Houston as they waited to take off Thursday evening, passenger Joseph Say told Houston ABC station KTRK.

"I had a seat in the back," Say said. "I looked up and saw a guy coming onto the plane wearing a full gas mask, which was kind of odd. He didn't have a filter though -- which I thought was even more strange."

"Immediately, people start talking in the back of the plane," said Say. "You couldn't see his face. You couldn't identify any features on him. People were worried he had sneaked something on board and that he had the mask for his own safety."

When asked by a flight attendant to remove the mask, the man refused. He eventually exited the plane after the crew called security.

The incident caused the flight's departure to be delayed by almost an hour.

Say posted a photo of the man on Twitter, along with the message, "Just FYI flight 2212 to Houston was delayed an hour because you let this guy on the plane wearing a gas mask. This then panicked people on the plane and we had to wait for him to be escorted off."

It’s possible but unlikely the man was wearing the mask in the boarding lineup. He likely added the dubious fashion accessory on the gangway.

"My gut reaction was that he was probably worried about the coronavirus and had put on the gas mask as overkill kind of protection," Say told KTRK. "But then I noticed it didn't have the filter, so that didn't really make sense."

"What we heard from the lady sitting next to him was he said he wanted to make a statement. I don't know what the statement was. I'm not sure what his goals were. To me, it seemed inconsiderate," Say said.

American Airlines officials subsequently told KTRK on Friday that the masked man was rebooked on the next flight to Houston, "and flew without the mask."