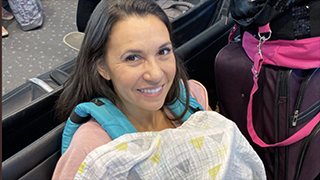 Travelling with a baby can be a challenge, but a Southwest flight crew went above and beyond to make the experience not only smoother, but very special for a pair of newly-minted parents.

Dustin and Caren Moore were flying home from Colorado to California after adopting a baby girl. When the crew found out about their new bundle of joy, they sprung into action to make it a memorable flight.

WN crew member Bobby took over the intercom and announced to the cabin that there was a “special guest” on board. “She’s just been adopted by her parents Caren and Dustin, and is making her way home,” Bobby said, to which passengers applauded.

The flight crew then passed out napkins and pens, asking fellow pax to share a little bit of advice for the new parents. The crew gathered the napkins, then read a few of their favourites over the intercom.

“Rub each other’s feet, and rub the baby’s feet.”

“Always tell her you love her.”

“Enjoy every minute. It goes by sooo very fast.”

About 60 napkins were collected for the Moores to keep.

In addition, the crew gave their daughter a pair of wings in honour of her first flight.

“What all of those perfect strangers and attendants did not know, was the emotionally tender state of two brand-new parents,” Moore Tweeted.

“Parents who after 9 years of trying had been blessed with their first child. Parents who felt scared, but determined in their new role. Thank you all for the love you've shown us. We only wish we could sit down with each of you, tell you the rest of the story, and hear yours."

It turns out that Bobby and Jenny – both flights attendants on the Moores' WN flight -- are a married couple who were paying forward the kindness they received on their honeymoon flight.