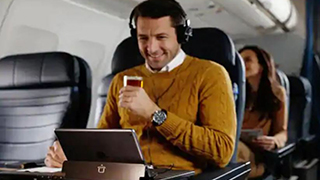 Economy cabin airline passengers sometimes have to fight tooth and nail for compensation when facing flight cancellations, delays or seat changes. They'll be lucky if they get a fast-food gift card.

But when it comes to biz travellers, this isn't a crowd airlines want to annoy; they're worth a lot of revenue, and they hold grudges.

In a classic case of "it pays to be rich", United Airlines doled out a total of US$90,000 in travel vouchers when a last-minute plane switch resulted in a business class seat shortage, forcing the airline to downgrade biz class pax to premium economy.

Nine passengers on the 11-hour direct flight from Newark to Hawaii each accepted the US$10,000 in miles to sit in "Premium Plus" on the Boeing 767-300. The Premium cabin offers pax more legroom and other benefits not found in regular Economy Class.

The airline calls it a downgrade, but doesn’t it almost sound like an upgrade?

"Occasionally we have to change aircraft at the last minute and when that happens, we try to do the right thing and make the impact to customers as minimal as possible," UA spokeswoman Maddie King told CNN Travel.

Peter Sasaki, who's flown more than a million United miles and has invitation-only elite Global Services status with the airline, said he does think it's a lot of money, but the move doesn't surprise him.

"It is probably better to get the pax to their destination at any cost rather than bump them and risk the cost of food, lodging, a rebook and bad PR, given how full flights are this time of year," he said.

Some on social media agreed, with one user tweeting, "Business travellers spend a lot of money on airlines, you’re talking about people that fly twice a week at least. When people spend that kind of money they’ll be treated accordingly."

But others pointed out the wide gap in treatment.

@sweetzmbejesus tweeted, "Meanwhile, I slept on a cot in O'Hare because they wouldn't pay for a hotel voucher after flight delays had me stuck between cities at my layover."