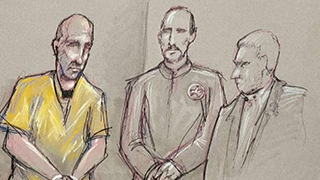 An American Airlines mechanic has been sentenced to three years in prison for sabotaging an aircraft with 150 passengers right before it took off – all in a bid to earn overtime for fixing the plane.

Surveillance video captured 60-year-old Abdul-Majeed Marouf Ahmed Alani tampering with the plane’s navigation system. Court documents show the sabotage involved gluing Styrofoam inside the nose of a Boeing 737 at MIA so that it disabled a component pilots use to monitor things such as airspeed, altitude and the pitch of the plane.

Authorities say if the flight had taken off as planned for Nassau, Bahamas, on 17JUL, the sabotage could have caused a crash.

Luckily, the pilot saw an error message while the aircraft was on the runway and returned to the terminal to have the problem examined.

Alani, in chains and dressed in a tan jail outfit, did not speak in court. But in a letter to the court, Alani said he was “truly sorry” for his actions.

An AA spokesperson said Alani had worked for American since 1988.