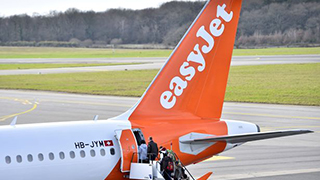 At least the mayhem started early this time.

An easyJet plane was turned back from taking off twice late last week as separate fights broke out on a flight from Manchester to Spain’s Alicante. Boozing flyers interrupted the trip before the aircraft had even had a chance to leave the tarmac.

A fight erupted on the aircraft before it could take off, forcing the pilot to stall the journey and police to escort the brawlers from the plane. Then it happened again, with more pax trading blows as the plane was about to make a second attempt at takeoff.

Reports say customers had been sucking back their own alcohol on board and prior to getting on flight EZY1919. The flight eventually left for the Spanish seaside city three hours late.

easyJet reported: 'We can confirm that the flight EZY1919 from Manchester to Alicante returned to stand on two occasions as a result of two separate groups of passengers on board behaving disruptively.

We’ve seen this scenario so many times now on cheap UK leisure flights – though at least in this case the plane didn’t have to turn back partway through the flight.

What’s the answer? Banning booze? Breathalyzing pax? The current situation is clearly unfair to families and sober pax just trying to get to their vacation destination.

Bruce Parkinson - March 9, 2020 @ 11:45
Sounds reasonable to me Steve. Many of these UK flights are less than three hours too. Would it really be so hard to go without? Steve Burnell - March 9, 2020 @ 11:27
This is just my opinion but have a one drink max on board, duty free should only be handed out upon arrival and anyone thought to be drunk, denied boarding - why does this happen so much in the UK?