Woman Tackled On Plane After Deliberately Coughing On Flight Attendant 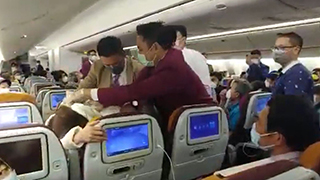 Being stuck on a grounded airplane for 10 hours can make anyone a little stir-crazy. Add the current coronavirus outbreak to the mix, and it's clear to see why tensions might be extra-high, and how a cough -- which might normally go unnoticed on a flight -- can escalate to a heated point.

A video shows a Thai Airways passenger being wrestled by airline crew after she allegedly deliberately coughed on them.

The female passenger reportedly became irritated after the aircraft was being held for up to 10 hours for coronavirus checks after landing at PVG in China. When TG crew refused her request to open the aircraft doors to let her out, pax on the flight said she began swinging her arms and deliberately coughing at one of the members of staff.

When the woman's rampage continued, a male member of the cabin crew arrived and put her in a headlock to restrain her, as seen in the video. It took several cabin crew to secure her, and she later calmed down without being handcuffed.

Pax were eventually let off the flight from Bangkok and went through COVID-19 health checks.

One passenger from Japan, who claimed to have been on the plane, said the entire situation of the plane being held at PVG was a “bureaucratic, dysfunctional mess."

“We could not open the doors of the plane until instructed to and health officials came to proceed with checks,” said. “Therefore, Thai Airways had to wait for seven hours before officials arrived at the inspection queue."