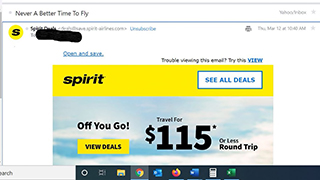 No stranger to controversial marketing messages, U.S. low-cost carrier Spirit Airlines had to scramble late last week to explain itself after a disastrously worded email promotion was sent out to customers.

The 'Never A Better Time To Fly' promotion was sent out in error, the airline said, given the current situation.

It went out to about 25% of its email subscribers before the airline managed to halt it.

The airline apologized for the snafu after some angry comments on social media.

"We apologize for the email that was sent earlier today. It was written prior to the current situation and unfortunately sent. We are closely monitoring Covid-19 and taking precautions to keep our guests and team members safe," the airline tweeted.

According to Spirit spokesperson Field Sutton, the ad was “created ages ago.”