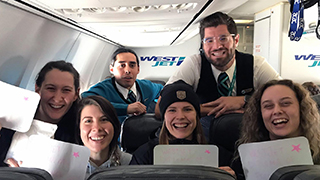 As more and more schools close their doors and switch to online classes due to the COVID-19 pandemic, it's leaving students with a shortened final semester and most likely no official graduation ceremony. Briercrest College and Seminary in Saskatchewan is no different.

But WestJet crew on flight 655 stepped in to create a special mid-air celebration for a group of Briercrest grads.

Four students on the Briercrest Clippers Women's Volleyball team were flying back to school after the CCAA National Women's Volleyball Championships in Québec City. Just hours earlier, they learned that their graduation ceremony scheduled for mid-April was "up in the air" and were having a tough time adjusting to the new reality they were facing as a result of COVID-19's rapid spread across the globe, according to an article posted on the school's website.

“It was a whirlwind of finishing our volleyball careers and then that night finding out that school was closing for the rest of the year and we were going to have to do online classes,” said Ashley Erickson in the article.

“No grad ceremony, no athletic banquet, everything was an abrupt ending from that day.”

The volleyball team chaplain, Joelle Epp, decided to take action. She spoke to the flight crew about what was going on.

“As soon as they heard her say that, they got so excited and started asking us to write down the degrees we would be receiving," said Erickson. "About five minutes later they started our impromptu, 39,000 feet above ground, graduation ceremony.”

Using the on-flight announcement system, the crew called out the names and degrees of each senior player, humming “Pomp and Circumstance” as they walked the centre aisle to receive homemade diplomas that read “West Jet Diploma of Excellence.”

You can view the celebration here.