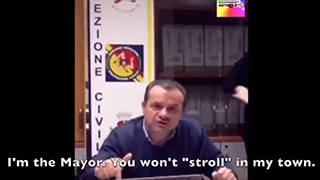 It's a simple message that aims to slow the coronavirus pandemic in Italy and save lives throughout the COVID-19 crisis, which has so far infected some 64,000 people here, and killed almost 7,000 -- more people than in any other country in the world.

While most Italians are respecting the drastic containment measures, some just aren't getting it, with reports of graduation parties and social gatherings taking place and people engaging in so-called non-essential activities like leisurely walking dogs and going for jogs.

Some Italian politicians are have had it up to here with the rulebreakers.

A spliced-together video shows six Italian political leaders ranting about ignorant citizens who are putting others' lives at risk, The video has received more than seven million views on Twitter since it was first posted on Sunday.

“I’m going to address you all,” one mayor says, according to the Twitter video’s translation. “Where the f— are you all going?” he shouts. He then attacks one of the most common excuses in Italy for breaching quarantine: to walk a dog.

“You and your dogs, which must have an inflamed prostate?” he says.

"I saw a fellow citizen amiably jog up and down the street accompanied by a dog that was visibly worn out," said Giuseppe Falcomatà, mayor of Reggio Calabria. "I stopped and told him, 'Look, this isn't a movie. You are not Will Smith in I Am Legend. Go home.'"

Another clip shows a mayor confronting a pair playing ping pong outdoors, telling them to go inside and “play video games” instead.

Vincenzo De Luca, the president of Campania, threatens to use force against people who break quarantine to attend parties.

“We will send the police over,” he says. “With flamethrowers.”

Another mayor vows to catch anyone who breaks the lockdown to go for a walk in his town.

“I’m going to catch you. Tomorrow. Not in a year,” he says loudly, before taking his voice up to a full shout.

“I’m the mayor! You won’t stroll in my town! I can’t formally ban you from leaving your house? Nice. I will ban you from stepping on public soil if not for proven necessities.”