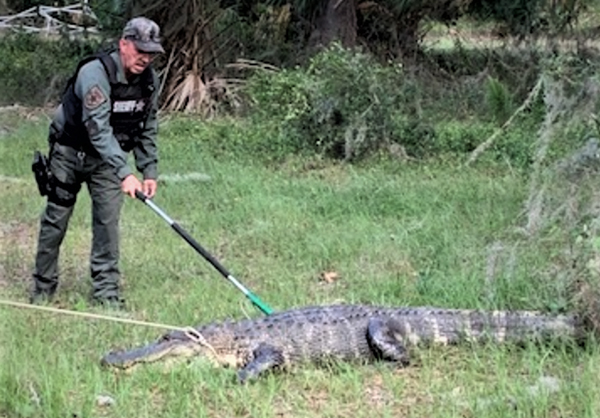 The Manatee County Sheriff’s Office shared a photo of a 2.3-metre long alligator who
was “being aggressive” with traffic during mating season.


It's not just aggressive drivers that Floridians need to watch out for — this time of year they also have to be on the lookout for love-struck alligators who can exhibit major road rage.

"It's gator mating season," the Manatee County Sheriff's Office said on Facebook. "This means they could be more mobile and aggressive than usual."

The post is accompanied by a photo of a 2.3-metre long male who was reportedly "being aggressive with traffic", so deputies relocated him to a gator farm.

Alligators become more active in the spring, as the weather warms. They begin to court in April, and mating occurs in May and June, according to the Florida Fish and Wildlife Conservation Commission (FCW).

With 1.2 million alligators in Florida, officials are reminding Floridians to never feed or harass alligators, and to report strongly smitten gators to the Nuisance Alligator Hotline operated by the FCW.