People aren't the only ones who've had enough of global travel restrictions.

Dolphins in Australia’s popular Tin Can Bay have taken to bringing "gifts" ashore in a bid to lure back the visitors who would normally be lined up to feed them before the coronavirus pandemic struck.

The pod of humpback dolphins has brought coveted offerings like sponges, barnacle-covered bottles and fragments of coral to Barnacles Cafe & Dolphin Feeding in recent weeks, a volunteer told Australia’s 7News.

“The pod has been bringing us regular gifts, showing us how much they’re missing the public interaction and attention. They are definitely missing you all," says a Facebook post on the café's page.

Barry McGovern, a dolphin expert and PhD student at the University of Queensland, was more skeptical in his interpretation.

“In all likelihood, they probably don’t miss humans per se. They probably miss a free meal and the routine," he told the news outlet.

“They often play with bits of weed and coral and all sorts of things and just leave it on their rostrum. They’re used to getting fed now, so they’re used to humans coming in. When it’s not happening, maybe it’s just out of boredom.”

Dolphins might just be the cutest golddiggers out there. 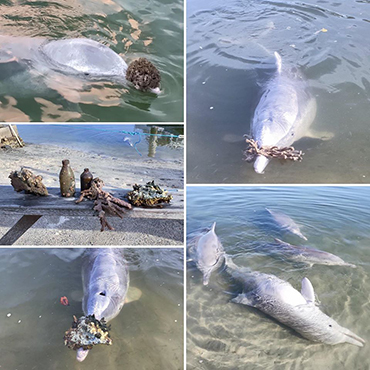