Reminiscent of the Cone of Silence featured in the 1960’s spy comedy Get Smart, a Parisian restaurant is testing plastic "shield pods" to keep diners safe from one another during the coronavirus pandemic. 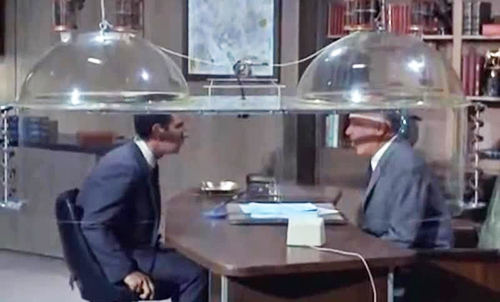 The plastic cones -- a prototype called Plex'Eat -- hang suspended over diners' tables at H.A.N.D. restaurant. Created by French designer Christophe Gernigon, they are made of plexiglass and resemble lampshades.

Gernigon told the Associated Press he was inspired after visiting a store in Bangkok "with three individual domes with chairs where people would sit and listen to music."

Gernignon told The Sun he has already received interest from companies in Canada. If Paris can do it...

Mathieu Manzoni, director of H.A.N.D., told the Associated Press he thinks the plastic cones are "pretty" and "more poetic" than other solutions to keeping diners safe when restaurants reopen. 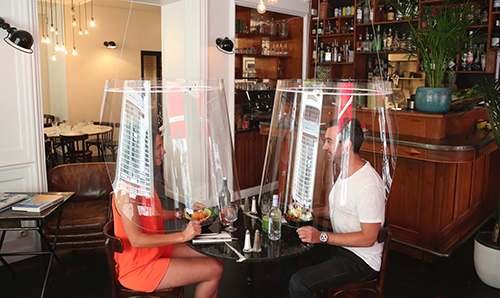 Pretty or not, they're designed to shield patrons from droplets, splashes and sprays that their compatriots might be expelling without impeding diners from communicating with one another or, most importantly, eating.

Does that mean the plexiglass gets foggy and covered in bits over the course of a meal? Does it come equipped with a spray bottle of glass cleaner and paper towels for a quick wipe up before dessert?

Let's just hope this contraption is more effective than the Chief's cone.