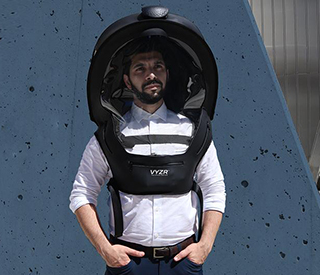 What are glam pax wearing for their next flight? Hazmat couture, of course.

At first glance, the US$498 suit, called BioVYZR, looks more like something Matt Damon would wear in The Martian, but anything it lacks in chic, it makes up for in protection from tiny viral particles.

BioVYZR fits over the top half of a person's body, leaves the hands exposed, and features an anti-fogging helmet with a generous-sized "window” (great for selfies!) and a built-in hospital-grade air-purifying device.

The BioVYZR is light, weighing less than 1.5 kilograms, constructed from silicone, neoprene, and vinyl, and Bloomberg says it's easy to disinfect and pack away between uses. A chest harness holds the suit snugly in place, with two adjustable side straps that can be cinched around the waist, similar to those of a life jacket.

If you’ve always felt vertically challenged, you may love the extra five inches of height the suit adds. For tall travellers, who already find economy's cramped quarters uncomfortable, that extra height may be a problem. Another challenge: the suit dampens outside sound, so hearing announcements or even your travelling companion beside you, may be difficult. Because the suit is a prototype, nobody, not even Al-Qaysi, knows how TSA officials or airline staff will react to it.

All worth it for the sake of safety though, right?

A lot of travellers think so. Al-Qaysi says some 50,000 suits were pre-ordered, with the first batch set to be delivered by the end of JUL.

Is this the future of air travel couture? Not likely, say some fashion forward globe hoppers.

Hillary France, founder of Brand Assembly, a business platform built to accelerate fashion and lifestyle brands, told Bloomberg the fancy hazmat suit will have its moment, but fade quickly.

“I don’t think this will replace the face mask as the garment we will put into the Covid-19 time capsule, but it is nice to be able to see someone’s smile,” she says.