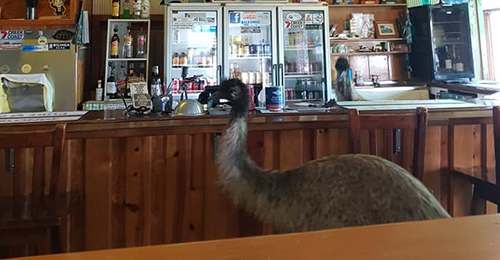 A hotel in Australia's Outback has banned two regular visitors for bad behaviour, complaining that they steal food, poop too much and, most horrifyingly, drink other guests' coffee.

It all went downhill when the pair of previously well mannered emus learned to climb stairs.

The brazen emu siblings -- named Kevin and Carol -- used to be welcome at the Yaraka Hotel's caravan park, often popping by for a few biscuits. Hotel co-owner Chris Gimblett allowed it but even then, guests had to be on their toes.

"Travellers have to be very cautious with the emus, because they will poke their heads in a caravan door and drink all the coffee without spilling the mug and steal your toast, and if you have a barbecue watch out because they'll take everything," he told CNN.

But then the scruffy siblings learned to climb stairs and breached the actual hotel area. That's when Kevin and Carol overstayed their welcome.

"You don't want to get between an emu and food. They've got very sharp beaks and they're a bit like a vacuum cleaner where food is concerned, so we were worried about them going into the dining room and causing havoc," he explains.

They don't tidy up after themselves either, and to make matters worse, they have a very active bowel system.

[Caution: The descriptive content of this quote may be disturbing to delicate readers. Discretion is advised.]

"Because they do eat so much food, their toiletry habits are very frequent... imagine a sloppy bowl of porridge that you turn over from a height of a meter -- the splatter is very effective.

The big birds found their way to the Gimblett's hotel several years ago, when a local hatched eight abandoned emu eggs. Most of the emus took to the wild, but Kevin and Carol (who, as it happens, turned out to be male) became permanent residents.