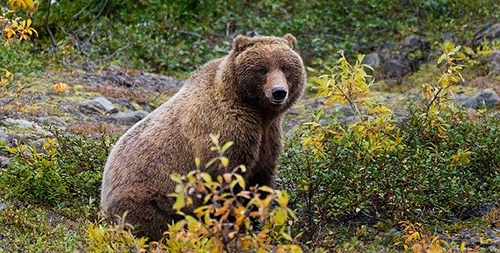 But that's not the right way to go about it apparently, according to the US National Park Service which is seeing an uptick in visitors fed up with being cooped up.

Pushing your friends down in an attempt to save yourself is also ill-advised, the NPS warned in a Facebook post Wednesday.

"Do not climb a tree. Both grizzlies and black bears can climb trees. Do not push down a slower friend (even if you think the friendship has run its course)," the NPS added. "Stay calm and remember that most bears do not want to attack you; they usually just want to be left alone. Don't we all?"

As US parks and backcountry areas see an increase in visitors, the NPS has offered a few tips on what to do if you're face-to-face with the furry beasts.

The best course of action is to safely remove yourself from a bear confrontation by slowly walking away sideways. Bears are not threatened when you move sideways, but like dogs, they will chase fleeing prey.

Another tip is to identify yourself as being human by speaking, so the bear doesn't confuse you for an animal, aka prey.

The best measure is prevention, so NPS recommends hiking in groups and not leaving food nearby camp spots.

If it comes to a grizzly attack, NPS advises leaving your backpack on and playing dead. If the bear continues to attack you, it's time to fight for your life.

If attacked by a black bear, do not play dead, NPS says, but instead try to escape to a secure place or if you can't, fight back using any available object.

Open Jaw's golden rule to surviving a bear attack is sticking to mojitos on Caribbean beaches.