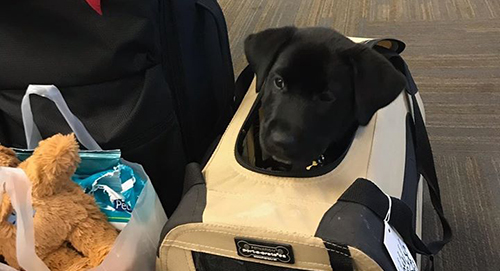 Going above and beyond, a Southwest FA flew 2,000 miles across the US, changing flights three times, with her delicate charge, an abandoned puppy.

Life didn't start out so grand for Harris the pup. Before his special journey, he was one of two puppies found in a box by the side of the road in the scorching Texas heat a few weeks back. The siblings were taken in by the Animal Rescue League of El Paso, which posted photos for adoption on its Facebook page.

It was love at first sight for a North Carolina couple, who lost their aging dog Hayes – also adopted from the Animal Rescue League – a year earlier. They immediately adopted one of the pups and named him Harris.

The challenge was to connect puppy and owners, since the couple had no way of getting to Texas. A willing volunteer is needed to accompany four-legged fidos on their journey, as puppies are not allowed to fly unattended. In this case, that good Samaritan was Southwest's Marcel Stratten.

“I was available to come to El Paso to pick up the puppy and then one of our amazing employees purchased me a ticket from El Paso to Raleigh because the flights filled up and there was a chance that I wasn’t going to get on,” Texas-based Stratton told KTSM.

Harris and Stratton spent a night at the Wyndham hotel, before changing flights three times to get to his new humans waiting in Raleigh. 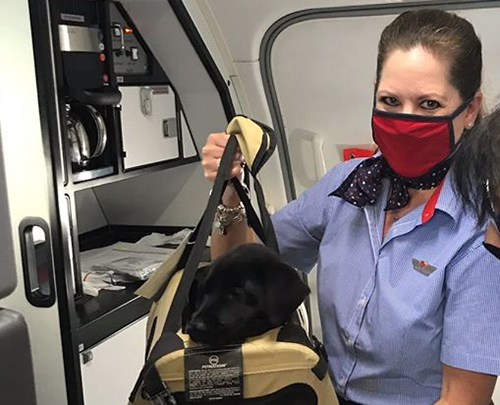 Harris was melting hearts wherever he went, which sometimes got the travelling duo some sweet perks.

“The woman at the hotel, Debbie, loves dogs, so she comped my room and made sure I got a room with a little balcony so Harris could go out,” Stratten said.

“Everyone needed to see a little kindness and this puppy brought so much love. The two pilots I had, they took him for a walk in the airport and all the passengers on the plane were just wanting to see him."

A local El Paso family adopted the other puppy found alongside Harris. His journey may not have been as long, but certainly no less special.