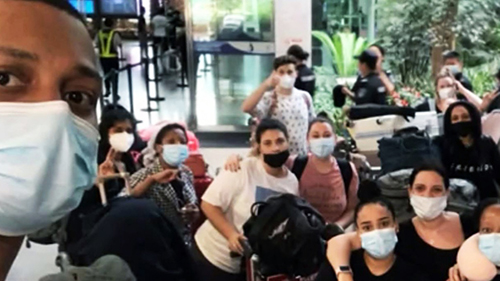 Some of the pax that were repatriated to South Africa. Photo credit: Carmen Johannie / CNN.

This is where some solid travel advisor skills would have come in handy.

After flag carrier South African Airways pulled the plug on a repatriation flight scheduled for mid-JUN, a Canadian pilot jumped several astronomical hurdles to repatriate get around 100 South Africans and a few dozen Zimbabwean students from China back to their home in South Africa.

And, as CNN tells it, it was all orchestrated from a dining room table in Canada by one man, armed only with a cellphone: Tertius Myburgh  -- a South African commercial pilot who lives in New Brunswick.

"They started contacting me, because I am in aviation, and they said: 'How are we going to get out of here?'" explained Myburgh, who began hearing from people after South Africa banned incoming travel in MAR.

By "several hurdles", we mean navigating a globe of ambiguous travel restrictions, collaborating with diplomatic channels across the world and dealing with a broken plane engine.

But first, it all started with the arduous task of chartering a plane amid international lockdowns. Myburgh used his connections in Southern Africa to lease a Boeing 767, plus its pilots and its crew, from Air Zimbabwe – the carrier's only functioning aircraft.

With so many calls coming in for help, Myburgh partnered with Carmen Johannie -- a South African schoolteacher based in Guangzhou who was also trying to get home to South Africa.

The dream team -- Myburgh, Johannie and the Air Zimbabwe 767 – went on to do what South Africa's national carrier could not.

Plotting a route that would make a travel advisor's eyes water, the plane and its crew left Zimbabwe in mid-JUL. They flew from Harare to Johannesburg, and on to Bangkok, before heading to Kuala Lumpur, where they picked up stranded commercial seafarers from China.

From Kuala Lumpur, they headed to Guangzhou, then back to Kuala Lumpur -- since they weren't authorized to take domestic routes in China -- and on to Wuhan, to pick up most of the South Africans, before eventually making it back to Johannesburg.

The repatriation effort almost didn't happen when the 767's engine broke on the Bangkok leg -- stranding the South Africans for another two weeks until a new engine arrived (making its own epic journey, from Harare, to Amsterdam, to Luxor, to Taipei and then on to Bangkok).

Then, in mid-JUL, after months of waiting, and weeks of disappointments, Johannie and the group from China were finally on their way home.

Johannie says their months-long ordeal is over thanks to one man. A man she has never met.

"I called him my guardian angel from day one, because that is literally what he was. He is literally the only one who could help us," she said.