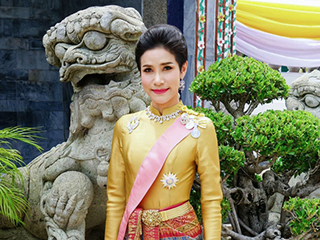 A Thai woman has gone from being a pilot in the king of Thailand's royal security unit to his concubine to an imprisoned dissident to, now, a "sex soldier."

Sineenat Wongvajirapakdi was the concubine of monarch Maha Vajiralongkorn before he stripped her of her titles and ranks and threw her in jail last year amid allegations about her “disloyalty” and ambitions to be queen.

Since October 2019, her whereabouts had been uncertain… But it seems the playboy monarch has had a change of heart.

On 27AUG, a Boeing 737 plane from the king’s private fleet was dispatched to Bangkok’s Lat Yao Central Women’s Prison, at which the concubine was said to have been kept, DailyMail reports.

Thailand expert Andrew MacGregor Marshall, said Sineenat was flown to Munich, where she was personally received by the king and driven to the Grand Hotel Sonnenbichl in the German resort town of Garmisch-Partenkirchen… where she will serve as a "sex solider."

The Daily Mail, citing reporting by German’s Bild magazine, reported the king turns the Grand Hotel's fourth floor into a pleasure house where his every sexual need is serviced by his personal harem.