Here we go again. Four years ago, during the last presidential election cycle in the U.S., Americans in despair about the state of their union and a Donald Trump presidency 'broke the internet' with searches for ways to move to Canada.

It's starting early this time, during the very first presidential debate. Google searches in the U.S. for the terms “move to Canada” and “how to move to Canada” skyrocketed during Tuesday's presidential debate, National Post reports. Queries hit their peak around 10 p.m. Eastern time, right as the two candidates – current Republican President Donald Trump and Democratic rival Joe Biden -- were locked in their verbal battle. 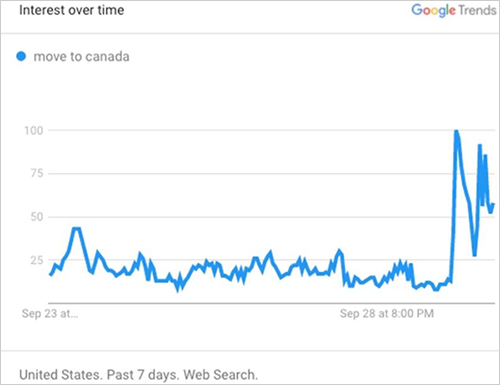 Who's looking to relocate north of the border? Americans already pretty close to the 49th parallel. Oregon residents were the most eager to move to Canada, according to Google Trends, followed by citizens of Vermont, Colorado, Washington and Minnesota.

National Post took a dive into social media discussions about the potential to make the move. Chris Arnold reported Twitter users had good questions and lots of advice about relocating north.

“What’s the housing market look like in Canada?” one user said. “Anyone have recommended cities to move to?”

Many responses highlighted Canada's problematic housing market, noting that relocating to Canada might be out of range financially.

“My grandparents’ small house in southern Ontario was just resold for $775,000,” another user said. “About 3 times what we sold it for 10 years ago. The average income in the town is $50k. How do Canadians afford to live there?”

Then there's COVID-19. Political writer Laura Bassett reminded everyone of the current global pandemic, and its impact on the US-Canadian border.

But American interest in escaping north during the final, heated weeks of the presidential election campaign seems unlikely to wane.

Consider what the folks at dictionary publisher Merriam-Webster say are some of the most-searched words during that same Tuesday debate.

Searches for the word logorrhea -- which means "excessive and often incoherent talkativeness or wordiness", according to the online M-W dictionary -- jumped by 56,000% Tuesday night. Viewers were also searching for xenophobia, " fear and hatred of strangers or foreigners or of anything that is strange or foreign."

You can't blame someone for packing their bags to escape that.