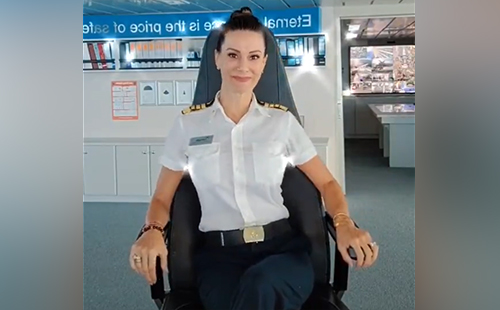 You've probably heard of Celebrity's Captain Kate McCue.  She made waves in 2015 as the first American woman captain of a mega-cruise ship and is currently captain of Celebrity Cruises' Edge.

'Captain Kate' - and her onboard cat - have become social media celebrities and have a big fan following of their adventures. But apparently, her long list of credentials, well-publicized industry leadership, and the high esteem of everyone in cruising weren't enough to satisfy one social media troll.

We weren't surprised that Captain McCue had the most epic reply. 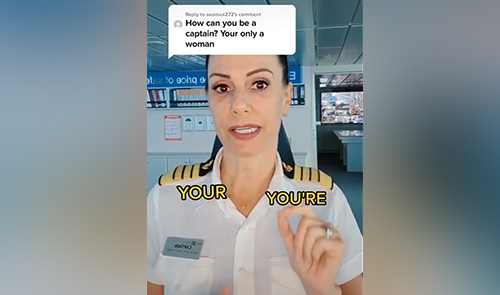 A Tiktok user sent Captain McCrue a insulting message, “How can you be a captain? Your only a woman [sic]”.

Dressed in her captain’s uniform, the 42-year-old posted a video response that was classy - but definitely had an 'Edge'.

“Normally as I’m scrolling through comments and see something like this, I totally ignore it and move on with my life," she said.

“But I think it’s about high time that I address this, because it’s 2020, and in this day and age I’m shocked that someone still doesn’t know the difference between ‘you’re’ and ‘your’.”

Captain McCue was happy to give him a quick grammar lesson.

She ends the video by reassuring the commenter, @seamus272, that she is available for future grammar tips. And subtly pulled rank.

“Don’t worry, I’m here for you. If you need any more clarification, you can find me here – in my captain’s chair.”

The video has quickly gone viral, amassing over 1 million views on Tiktok, nearly 300,000 likes and thousands of comments.

@julie_marie00 commented, "Gold!! You hit the nail right on the head, good for you, now continue being awesome," while @avi_dia said, "This is one of the wittiest responses I have heard in a while! Respect. You are officially my hero."

The troll has since deleted their Tiktok account… probably to spend more time focusing on there -- their grammar skills.