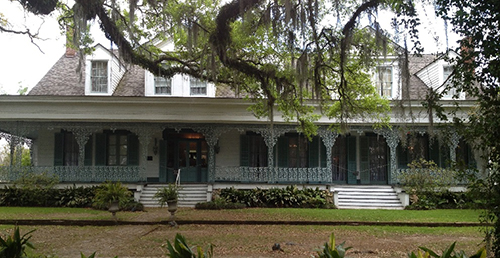 Reality can be scarier than any story.  And with Hallowe'en just a day away, these spooky haunted houses across the U.S. have their moment in the sun - er, full moon, drawing on all the macabre lore they can to get thrill-seeking visitors jittery and jumpy.

Myrtles Plantation in St. Francisville, Louisiana, is billed as one of America’s most haunted homes, with chilling ghost stories that date back to the late 1700s. Like other plantations in the U.S. South, Myrtles has a history of slavery, and the ghost of a girl who is believed to have been enslaved on the plantation has been captured on film, USAToday writes. The home now serves as a bed and breakfast and restaurant but also offers tours.

The brave can also stay overnight at the Villisca Axe Murder House in Iowa, an estate where four people were murdered in 1912.  Their killer was never found. A number of paranormal investigations and tours at the site have uncovered disembodied voices, moving objects and other mysterious occurrences.

In King George, Virginia, the Belle Grove Plantation B&B hosts weekly ghost hunting tours and paranormal events throughout the year,  even a two-night bash scheduled for Halloween weekend. Guests report they have seen apparitions of Union soldiers and interacted with the spirit of a playful young boy named Jacob – ghosts of dead children: the creepiest!

Finally, there's San Diego, California's Whaley House. The site of several deaths, legend has it the ghost of a man hanged on the grounds can be heard stomping through the halls, and apparitions of the Whaley family have reportedly been spotted.

So if binge-watching horror movies on Hallowe'en just doesn't do it for you anymore, head to any of these haunted houses in search for the 'real' thing.