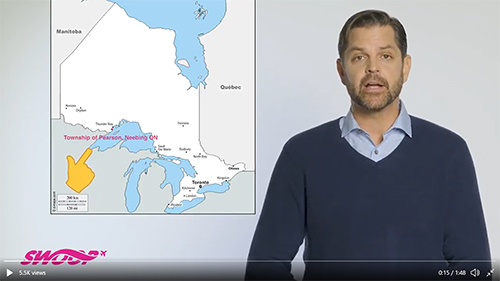 Most people know that YYZ's full name is Lester B. Pearson International Airport - often referred to as simply "Pearson". But it turns out, not everyone associates the word "Pearson" with the country's largest and busiest airport.

And one woman's case of mistaken identity - or tweeting before you think -  has landed a small town a pretty big reward.

When Swoop announced it was going to start flying out of Pearson, Barb Higgins responded with elation on Twitter, delighted the LCC will be offering service out of her hometown of Pearson, a township in Neebing, Ontario.

Not so fast, Barb… Airline officials were quick to correct her misunderstanding, pointing out they were actually referring to Pearson -  as in YYZ - not Pearson, the rural township of 374 people outside of Thunder Bay, ON, that doesn't even have an airport.

“When we announced that we were going to be flying from Pearson, we thought it was obvious we were talking about the international airport in Toronto. Like really obvious. But as it turns out, someone from the Township of Pearson in Neebing, Ont. thought otherwise,” says airline spokesman Ernie Douglas, in a video released to the airline's Twitter page last week.

While it was not at all responsible for the mix-up, Swoop nonetheless donated a generous gift for the community.

No, it wasn't an airport. A brand new skating rink.

"Normally we just throw a bunch of free flights your way and call it a day," said Douglas.

"But that probably wouldn’t do much good, since you’re 16 hours away from the nearest airport we fly from. Luckily, another one of your tweets gave us an idea…. Swoop is donating a new skating rink to your township. It’s our way of saying sorry, which by great coincidence, also happens to be great PR for us."

But not everyone was impressed with Swoop's grand PR gesture.

@NimmoDavid tweeted: "Massive lay offs in the airline sector and buddy is buying a skating rink for a town with a population of 300. I sincerely hope this airline is not getting government assistance."

Another user, @JMason235, wrote: "What a slap in the face to all those laid off employees. Whoever gave this PR project the green light should be terminated just like so many others were @WestJet."

Pearson resident and the tweeter who set in motion the entire story, Barb Higgins, however, was delighted. While flying to Jamaica from a hometown airport isn't in the cards for her, the Pearsonite tweeted she'll be dusting off her skates instead.