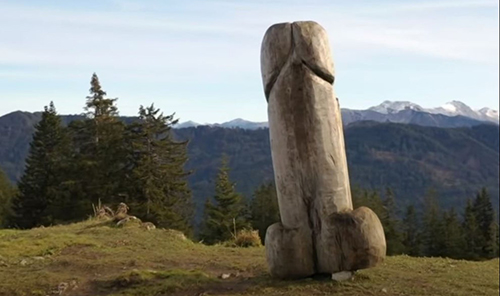 A large wooden sculpture of a phallus in the German countryside is the latest victim in a string of disappearing pillars around the world.

The two-metre-tall sculpture, which surfaced without explanation on the peak of Grünten mountain several years ago, appears to have been chopped down over the weekend. Now all that remains is a sad little stump and sawdust.

According to the locals, the oversized member was erected as a prank birthday present for a young man whose family didn’t appreciate the gift… So the 200kg sculpture was hauled 1,738-metres up the mountain for the world to enjoy. Talk about getting it up!

It had gained celebrity status among hikers, who made the trek up the mountain to see the pillar. It even appeared on Google Maps, where it was classified as a “cultural monument."

Long upright structures around the world have been mysteriously appearing and disappearing lately, starting with the metal monolith discovered in the Utah desert at the beginning of November, only to disappear days later. Similar metal columns have appeared in Romania, California, United Kingdom and the Netherlands.