The Story Of The Big Birds & The Bees 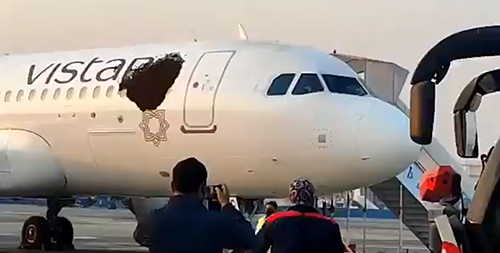 Despite the fact that there’s little nectar to be had, bees buzzing around fuselage has been known to happen. Anyone can get the itch to travel.

But a swarm of thousands attaching itself to the side of a plane can land a real stinger in the group travel department.

In November, not one, but two Vistara flights were delayed as fire departments were called in to disperse massive hives making themselves a home on the plane.

In the first instance, the bees took possession of the Delhi-bound airplane just before boarding was due to start.

“Within minutes, lots of bees had settled on the plane as though ready to build a hive. Water jets had to be sprayed for a good 30 minutes to dislodge them," a Vistara spokesperson told The Times of India.

The bees returned with a fervor the next day, swarming around yet another Vistara flight, this time bound for Port Blair. The bees clustered just above the cargo bay door, making it impossible for baggage handlers to load passengers’ luggage into the hold.

Once again, firefighters came to the rescue with a water cannon, and the flight departed an hour later.

As one passenger tweeted “Unruly passengers, technical issues, bad weather, de-icing, late aircraft… all reasons why a flight might be delayed, and now there's another one to add to the list: swarms of bees.”