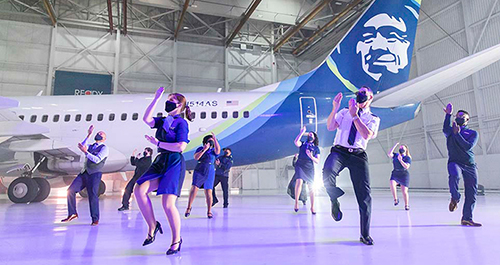 Safety protocols have become somewhat of a languid drone over the past 10 months. Masks (ok, we get it), hand sanitizer (for the 10th time, yup), don’t touch your face, yadda yadda... But Alaska Airlines has spiced things up with a catchy, quirky safety video you'll want to watch -- on replay.

The airline's new one-minute safety video features 11 AS employees bustin' moves to the tune of "You Can Dance" by Montreal synth-pop band, Men Without Hats- although surprisingly, the song’s origin is not mentioned in any of promotional materials.

The famous lyrics have been craftily adjusted to highlight the airline's health protocols, from mandatory masks to washing hands and HEPA filter air cleaning.

"We can fly if we want to, we can leave your house behind. But if your friends don't mask -- and why don't they mask? – well, they won't fly this airline," a male voice sings at the beginning of the song.

The video is set in Alaska Airlines' Boeing cabin trainer and maintenance hangar, located in Seattle. Some A-list creatives were enlisted to produce the video, starting with director Warren Fu, who is known for his work with Dua Lipa, The Weeknd, Daft Punk, and HAIM. Anna Matuszewski, who previously worked with Macklemore, choreographed the piece.

A variety of Alaska Airlines employees participated in the project. Some even came from the Alaska Flight Attendant Drill Team, which dances through Seattle for the Torchlight Parade and other events worldwide, representing the airline. Others were chosen based on their workgroups, ability, and willingness to dance, and leader nominations.

“Our employees have always been our greatest cheerleaders and champions of our brand – they’re the driving force behind our 88-year history. We know teamwork, kindness, personality and safety above all else are critical to our recovery," said Sangita Woerner, Alaska Airlines Senior Vice President of Marketing and Guest Experience, in a press statement that takes a behind-the-scenes look at the creation of the video. 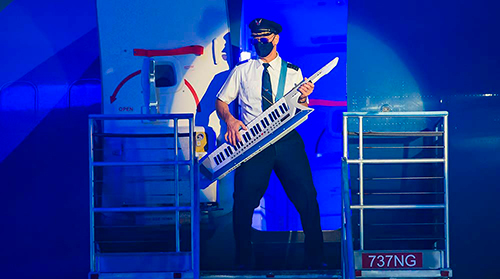 Natalie, a Horizon Air flight attendant based in Seattle who was in the video, said: “From the director, to the choreography, the cameras, the music, makeup and hair artists and so on it was like being on the set of a movie. Everyday was filled with excitement and anticipation. It was very professional, well organized and definitely on my top 10 things in life that I have been a part of.”

Some of the performers starring in the video had never danced before, like Michael, a Horizon Air ground service agent. Horizon is a sister company of Alaska Airlines.

“I’ve never danced before in my life. I focused on working hard at rehearsal and doing my best to keep up. I kept practicing the moves in order to successfully pull this all off," he said.

Good luck getting the song out of your head today!