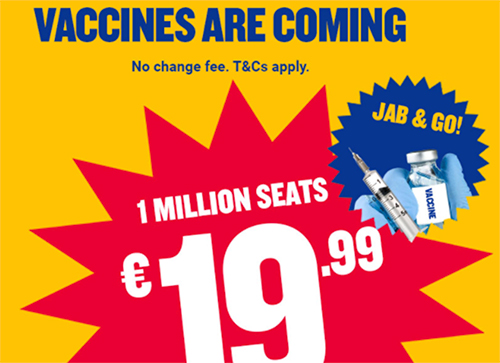 Ryanair is at it again. The airline which thrives on controversy has taken a deadly pandemic and turned it into an ad campaign.

The “Jab & Go” ads promote booking travel now since just a little jab’ll do ya. First you get vaccinated, then you go off to warmer, sunnier, beachier destinations.

Unfortunately for the Ireland-based LCC, the tone of the advertisement needled some consumers – or the United Kingdom's Advertising Standards Agency (ASA) which has launched a formal investigation after receiving more than 1,600 complaints.

The campaign on the airline's website features an image of a syringe and a bottle branded "vaccine," alongside the slogans, "book summer," "vaccines are coming" and "jab & go," accompanied by promotions for budget flights.

A spokesman for the ASA told CNN that complainants felt the advertisement "misleadingly suggests that the vaccine will have been successfully rolled out across the population by spring/summer and that travel restrictions won't apply by then."

Although the first vaccinations against COVID-19 have already begun in the UK, it will still be several months until most of the population gets their prick in the arm. For citizens of other countries, the wait could be even longer.

Complainants also found the advert "offensive and irresponsible," said the ASA spokesman, adding: "In their view, it trivializes the effect of the pandemic on individuals and society."

Not the shot in the arm the carrier was looking for.