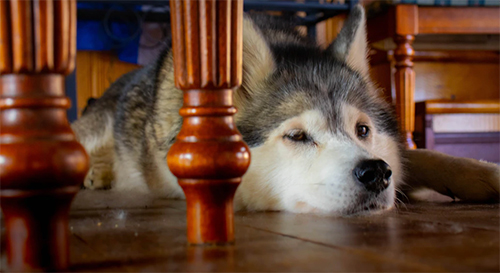 Chargers, phones and tablets are among the most common items left behind in hotels, but the list includes such incredulous belongings as man’s best friend. When Dad said “Honey, I forgot the dog!” it probably didn’t go down well with the kiddies.

A Siberian husky is just one of the curious items left behind at Travelodge properties in the UK last year, reported The Daily Mail. The hotel chain provided the tabloid with a long list of items customers left behind across its 563 branches last year and it ranges from the lavish -- a ticket to the Maldives – to the baffling -- a William Shakespeare outfit with a skull.

Maybe the abandoned army of six-foot tall Nutcracker soldiers were left behind because they didn’t fit in the suitcase, but forgetting a prized Star Wars R2-D2 robot? There really is no explanation except that The Force was clearly not with the guest…

Other lost items included a message in a bottle wedding proposal, a money tree bearing £50 notes to the value of £10,000 (CA$17,000) and a 60-year-old marriage certificate. If they had all been left by one person, then that would definitely make an interesting story.

Some of the forgotten objects had dire consequences. A CEO staying at Aberdeen Central Justice Mill Lane Travelodge missed his flight because he left his "lucky penny" behind, which he has been carrying around for 40 years.

And the hotel manager from Gatwick Airport Central Travelodge PLUS had to jump over stanchions to reunite newlyweds with their first class tickets to the Maldives. They obviously had other things on their minds while staying in the room.

Travelodge has kept its properties open during lockdowns in the UK to support local communities and provide accommodation for key workers and local authorities. The result is a steep rise in items left behind by medical professionals.

The hotel team at Chelmsford Travelodge reunited a nurse with a diary documenting her experience during the pandemic, and a large box of Union Jack face masks were forgotten at the London Central Waterloo Travelodge Plus.

There were also stethoscopes, lab coats and scrub sets that were left stranded.

"With millions of customers annually staying at our 563 hotels across the length and breadth of the UK for thousands of different reasons, we do get a range of interesting items left behind," Travelodge spokesperson Shakila Ahmed told WalesOnline.

"When it comes to why so many of our customers forget their treasured items, it's basically due to us all being time poor, juggling multiple tasks and being in a hurry to get from A to B. In the rush, valuable possessions are easily forgotten."

The Travelodge "Lost and Found" bin must be a fascinating world to wade through. Perhaps it's also where Garneau forgot his promised airline aid package?