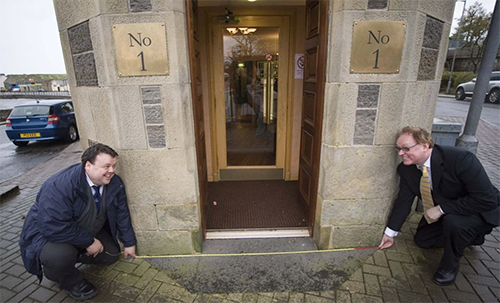 If two friends were to stand on opposite ends of Ebenezer Place in Scotland, they would barely meet the pandemic requirement of six feet of separation.

That's because it takes all of three steps to walk from one end of Ebenezer Place to the other. Barely enough to stretch one’s legs after dinner.

The street in the Scottish town of Wick measures 6 feet and 9 inches - about the length of a smart car.

Ebenezer Place is home to a single building -- the thin end of Mackays Hotel. The doorway of the hotel that faces Ebenezer Place leads to the aptly named No1 Bistro, the street's only address.

The hotel's co-owner, Ellie Lamont, who runs the venue with her husband, Murray, told MailOnline Travel that they get many guests who are fascinated by the world record.

"Some don't know about it and when they turn up they find it interesting. Some know about it and still can't believe it's only six feet, nine inches, while other people come into the hotel to ask where it is," Lamont said.

According to the hotel's website, in the 1880s the city council told the hotel to put a name on the short end of the building as they deemed it a street. "Ebenezer Place" then appeared in the town’s records from 1887.

In 2006, the street was measured by Guinness World Records, which declared it the shortest in the world. The hotel website says Craig Glenday, the editor-in-chief of Guinness World Records, "battled through gale-force winds and storms" to get to Wick to measure it. After "50 hours and several detours" – likely because he just couldn't spot the puny street -- he arrived, officially measured the street and declared it a world record.

On the other end of the spectrum stands Toronto's Yonge Street which, according to Toronto.ca, is the longest street in the world. Depending on how you measure it, it could be either 56 kilometres long or 1,896 kilometres - give or take. Either way, with stores and restaurants closed, there’s nothing but room to distance.