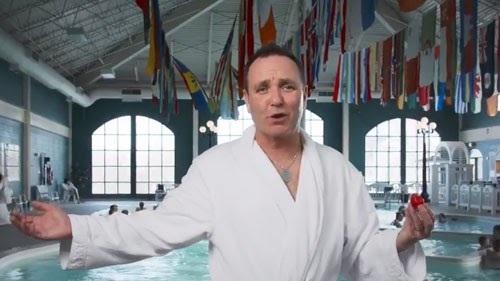 Fraser Tolmie wasn’t among the parade of Canadian politicians named-and-shamed for jetting off to sunny beaches over the holidays while urging “normal” Canadians to stay home.

Moose Jaw’s mayor says he has an excellent reason.

It’s not just because Moose Jaw doesn’t have any direct flights south. It’s because he felt he had everything he needed right in his hometown -  and now, he stars in a viral video inviting Canada’s political class to come for a visit in Moose Jaw.

“Are you a Canadian politician taking heat for going away at Christmas?” Tolmie asked in the Tourism Moose Jaw video as he strolled through the city’s Temple Garden’s Hotel and Spa pool wearing a white terry cloth robe.

“I’m notoriously lucky, because I don’t need to take the heat to get away from it all. Why? Because we have it all right here in Canada’s most notorious city,” a reference to the city’s bootlegging past when gangster Al Capone is said to have used the Saskatchewan city as one of the places where he sourced illegal liquor during Prohibition.

Mayor @FraserTolmie with a message for politicians needing to escape the heat. The City of Moose Jaw asks everyone to follow current Public Health rules. #cityMJ #Notorious pic.twitter.com/d61tzhftmT

The ad encourages Canadian politicians and citizens alike to travel to Moose Jaw instead of now-banned international travel destinations.

“We want to be positive and we want to focus on where we're going, not where we’re at. So we want to give some people hope and give them some options to come to Moose Jaw and support our local business here,” Tolmie told CTV.

The response to the ad campaign in the Twittersphere has been overwhelmingly positive, with a proverbial ‘two thumbs up’ rating from the viewing public.

“Wow, now I have to visit Moose Jaw. Maybe even retire there,” wrote one user, while another applauded, “I know nothing about his mayoral skills but this ad is great!”