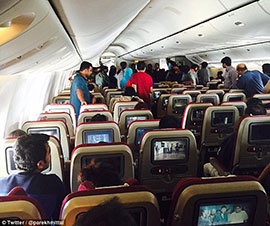 Twelve hours on the tarmac before a 16 hr. flight? Definitely cruel, thankfully unusual.

But that was the reality for pax on Etihad Airways Flight 183, bound for SFO from AUH. They eventually landed in San Francisco, safe but understandably irritated after their ordeal.

Tempers grew short when fog in Abu Dhabi delayed takeoff for 1/2 of the day, pax told San Francisco broadcaster KGO. "They kept telling us that we were going to leave, you know 15 min. from now, 20 min. from now, 30 min. from now, for 12 hr.," passenger Thomas Piani told reporters after finally landing on Saturday evening.

Passengers said the flight crew told them AUH was too crowded with other stranded flights to allow them to get off the plane to wait.

Etihad apologized for the inconvenience, saying the problem was largely beyond its control and affected other airlines as well. The airline told AP in a statement that "unprecedented fog" had delayed flights and caused airport congestion.

"The passengers remained on the aircraft as all efforts were being made to secure a new departure time. The delay was then compounded by the requirement to replace the aircraft's ultra-long haul operating crew who had exceeded their flight time limitations," the airline said.

Flight attendants eventually passed out sandwiches and water after some people made a fuss over the lack of food, passenger Ravali Reddy said. "No one was angry about the delay itself. If it's unsafe to fly, we don't want to fly," she said. "It just didn't seem to make any logical sense why we had to stay on the plane."