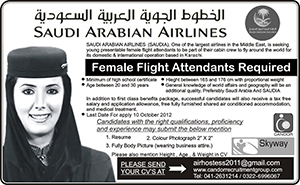 Following a number of complaints by male pax, the Kingdom’s media had reported SV would begin implementing a policy to separate airplane cabins by gender. Apparently male pax had been upset about having random males seated next to their wives.

“We have introduced some solutions this week and we are awaiting its result.There are solutions to this problem… we will soon enforce rules that will satisfy all passengers,” Saudia Assistant Manager for Marketing Abdul Rahman Al Fahd said, according to Saudi daily Ajel.

However, SV has now released a statement denying reports they will introduce segregated seating on their aircraft. “SAUDIA has denied a press report carried by the social media that it was going to introduce gender segregation on its flights. We would like to emphasize that no SAUDIA official has made any statement on gender segregation.”

The airline claims that Abdul Rahman Al Fahd’s statement was taken out of context and does not imply that gender segregation of flights will be instated as the status quo. SV reiterated that they offer families the opportunity to book seats together and that “cabin crew members try their best to solve such problems quickly without causing flight delays.”

Saudia's policies are already in accord with the strict Islam practices of the Kingdom. For instance, in addition to the routine boarding announcements at Saudi Arabia’s airports, a prayer or verse from the Quran is read prior to take off. Furthermore, international flights usually have a specially designated men’s prayer area to accommodate 5 daily prayers.

SV does not serve any alcohol or foods including pork products. And the onboard entertainment menu does not offer any movies with adult content.

Saudi women are also not employed as flight attendants on SV. That role is reserved for women of other nationalities.