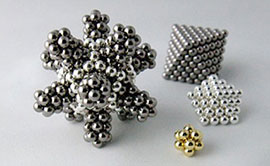 Maybe it was a kangaroo court.

Australian airline Qantas has been slapped with a $200,000 fine. But it wasn’t for poor maintenance – the airline was recently honoured for the umpteenth time for its safety record. And it wasn’t for tarmac delays either – QF also boasts one of the best on-time records in the industry.

No, Qantas was fined for selling dangerous toys.

They were banned in Australia after being identified as a choking hazard for children. Experts say they also have the potential to lead to serious medical issues if swallowed. In fact, the Nanodots website features a prominent warning that swallowed magnets “can stick together across intestines causing serious or fatal injury.”

Passenger Ian Anderson caught the airline selling the toys during a flight to HKG and left feedback twice before the $55 magnet were removed and recalled. Around 223 are said to have been recalled by the carrier.

However, in June last year Consumer Affairs had already started a case against the carrier and Alpha Flight Service – the group that manages’ Qantas’ duty free program. Federal Court Judge Tony Pagone criticized the carrier for its delay in removing the product from its duty free options and said although Alpha Flight Service sourced the product, it was ultimately Qantas’ decision to sell illegal product.

“It was Qantas staff who sold all of the Nanodots on Qantas flights. Qantas crew were responsible for selling the products listed in the in-flight catalogue and were paid commissions by Qantas for sales.”

The court then issued a $200,000 fine to QF and $50,000 to Alpha. They were also advised to post notices on their websites and in newspapers.