Driving While Gay In Russia May Now Be A Crime 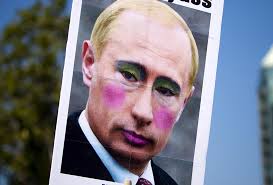 Russia isn’t likely to be high on the list of desired destinations for gay or transgendered travellers, but just in case you have clients from those groups considering a trip, there’s something new to report: they may not be allowed to drive a car.

A new law signed by Russian Prime Minister Dmitry Medvedev bans people with "sex disorders" and other physical and emotional "disorders" or challenges, from driving. It's claimed to be an attempt to reduce the number of on-road motor vehicle accidents.

Transgender people are no longer allowed to drive, nor are people with what Russia terms “disorders of sexual preference.” It is not currently believed that gay, lesbian or bisexual people fall into that category, but given President Vladimir Putin's war on the LGBT community that could change with clarification.

The list of people with "disorders" that Russia now sees fit to ban from the roadways include people diagnosed with “sadomasochism,” “paedophilia” and “exhibitionism," according to Buzzfeed. So are people shorter than 4' 11", amputees and people who are colour blind.

"Fetishism, exhibitionism and voyeurism," according to the BBC, are also on the list, as are pathological gambling and compulsive stealing.

Human Rights First called the move "an alarming violation of the rights of the transgender community," noting that the list "includes 'personality disorders' as listed by the International Classification of Diseases Number 10 (ICD-10) including being transgender, bigender, asexual and cross dressing."

“Banning people from driving based on their gender identity or expression is ridiculous and just another example of the Russian regime’s methodical rollback of basic human rights for its citizens,” said Shawn Gaylord, Human Rights First’s Advocacy Counsel for LGBT Rights. The organization is calling on the U.S. to condemn the move.