Man Falls Off One Cruise Ship, Rescued By Another 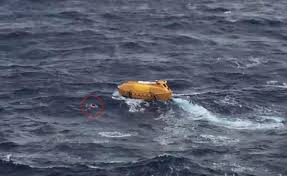 A man who fell from Oasis of the Seas off the coast of Cozumel was rescued hours later by Disney Magic after pax spotted him in the water, Mexican authorities say.

"The man was travelling in the Oasis (of the Seas). It was early in the morning. He doesn't remember how he fell. Fortunately, another cruise, the Disney Magic, saw him," said Cozumel Port Captain Alfonso Rodríguez.

The lucky man, a 22 yr. old U.S. citizen, had been in the water for about 5 hr. before being rescued, almost purely by chance.

"At 7:31 a.m. a passenger aboard Disney Magic reported a man in the water. The passenger had thrown multiple lifesavers in the water to help him," said Rodriguez. "They rescued him and gave him medical attention."

The man was taken to a local hospital and was in good condition before he was flown back to the United States, Rodriguez said. "This man was reborn. Most people that experience that kind of fall break their neck. It's like hitting concrete."

CNN reports that David Hearn, a Disney Magic passenger, recorded the rescue on video. The images reveal a yellow rescue boat bobbing on dark ocean waters, and a man's head and arms barely visible above the waves. The man then swims toward the boat and is brought aboard.

"We were in our stateroom. On the speaker system, we heard the crew saying 'Mister M-O-B, starboard side.' I got dressed and went up to the upper deck," Hearn said. M-O-B is the code used for "man overboard."

Hearn said he spoke to the passenger credited with spotting the man in the water. "His daughter had gotten up, and they had a room with a balcony. She wanted to sit out there, and he went with her," Hearn recalled. "They heard a noise, and as the ship got closer, they realized it was a man screaming for help. They got on the phone with guest services, and the ship came to a stop."

Royal Caribbean closed-circuit TV video showed the man was alone on Oasis Deck 5 when he went overboard at 6:07 a.m. "There were no other guests or crew around at the time," said Cynthia Martinez, a Royal Caribbean spokeswoman.