Supersonic Dreams: Around The World In 4 Hours 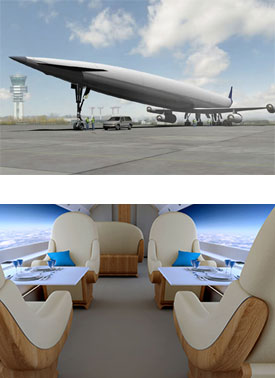 The European Space Agency is working on a new plane that promises to travel so fast it will make the Concorde look a C-130 Hercules.

The jet project called LAPCAT or Long Term Advanced Propulsion Concepts and Technologies aims to develop a high-speed aircraft that can fly up to 5 times the speed of sound – that’s over 6,000 km/h.

At that speed, you could fly anywhere in the world in just 4 hours.

Plans are for the aircraft to be fuelled by hydrogen, making it one of the greenest planes in the sky. Additionally, it will use new pre-cooler technology that will enable the engine to be cooled by 1,000° Celsius in 0.01 seconds.

Dubbed Skylon, the aircraft will only be 267 ft. long and carry around 300 pax. Unlike other planes, Skylon won’t have any windows.Going windowless cuts down the weight of the jet, another key factor in boosting speed.

With hugely ambitious projects like these, things don’t always go according to plan. But so far, the European Space Agency says the Skylon is expected to take its 1st test flights in 2019.