SkyMall Driven Into Bankruptcy By The Smart Phone 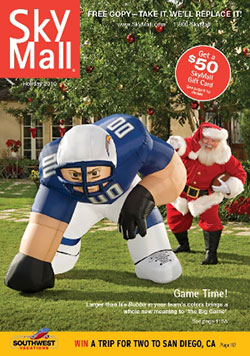 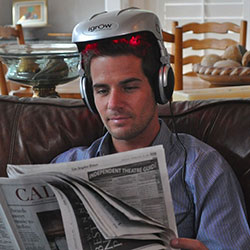 What will life in the air be like without SkyMall and its crazy offerings?

Where else could you buy a lawn zombie, a life-size Bigfoot Garden Yeti statue or a helmet that promised to regrow your hair using lasers?

For years, U.S. airline pax could settle in, buckle up and reach into the seat-back pocket in front of you. There, pressed up against the motion-sickness bag or the laminated emergency instruction card, was the latest edition of SkyMall.

But this great American aviation tradition may now be over as SkyMall’s parent company, Xhibit, has filed for bankruptcy protection.

The explanation for the company’s demise is simple enough. It used to enjoy the ultimate captive audience: hundreds of millions of travellers who were stuck on an airplane for hours with limited diversions. Today’s flying experience now includes smartphones and laptops and iPads and seat-back screens on-demand viewing. There’s even in-flight WiFi.

“Historically, the SkyMall catalogue was the sole in-flight option for potential purchasers of products to review while travelling,” Xhibit’s Chief Financial Officer, Scott Wiley, wrote in a note accompanying the company’s bankruptcy filing. “With the increased use of electronic devices on planes, fewer people browsed the SkyMall in-flight catalog.”

SkyMall was started in 1990 by a 32 yr. old accountant named Robert Worsley, now an Arizona Republican state senator. “A couple of iterations of the catalogue made it clear that people on planes will not buy normal things that they find every day at the mall,” Worsley told the New York Times. “They seem to hit on highly unique, I’ve-never-this-seen-before, kind of ‘Wow!’ things. The consumers buy or they don’t buy; I can’t claim any great genius.”

In 2001, Worsley sold SkyMall to Gemstar-TV Guide International Inc. for about $47 million. The company has changed hands several times since. It was bought in 2013 by Xhibit, which describes itself as a marketing software and digital advertising company.

According to SkyMall’s website, the catalogue reaches some 650 million people every year, or nearly 88% of U.S. domestic air travellers.

Is it too late to order the wine glass that holds a full bottle, or a tasty jar of bacon jam? Time will tell, as Xhibit will auction off its assets in a couple of months.