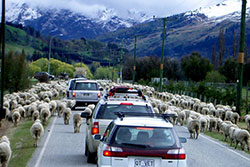 Kiwis have had enough of dangerous driving by tourists.

Crashes and bad driving by visitors, sometimes causing death, have generated a lot of negative publicity in New Zealand over the past few years. But in a recent incident, a local took drastic action.

A tourist from Australia was left stranded with his wife, 3 children and 2 elderly friends in a remote pass on New Zealand’s South Island after a local man made him pull over his rental car and then took his car keys.

The Dunedin-based Otago Daily Times newspaper interviewed the New Zealander who took the tourist’s keys, and he is making no apologies. He says he acted to protect the public because the tourist was driving his car so erratically it was endangering other traffic.

The New Zealander says he was driving in the remote and spectacular Lindis Pass in Central Otago when he encountered a rental car being driven in the opposite direction by the tourist driver – who is now reportedly facing police charges.

The Kiwi claims the rental car driven by the Australian was in the wrong lane while passing other traffic on a bend. It was an “absolute fluke” it hadn’t caused a fatal accident, he said. “It’s just hard to put it into words just how close it was.”

The local driver, who has a background in motorsports, was so outraged at the sight he did a U-turn and caught up with the errant vehicle. He overtook the rental car, slowed down and indicated that the other driver should pull over.

According to the paper, he told the tourist driver to move his car to the side of the road with the words: “Look, you can’t drive like that mate; you almost killed a carload of people.”

The safety-conscious Kiwi then reached through the open car window, took the keys, drove off and reported his action to the police as soon as he was within mobile phone range.

The man has been hailed as a local hero on social media in New Zealand. According to the Otago Daily Times, however, the tourist driver believes the situation was inappropriately handled. Another motorist who stopped to help the stranded group agrees, the paper said.

Police say they had already received a complaint from another source about the way the rental car was being driven.