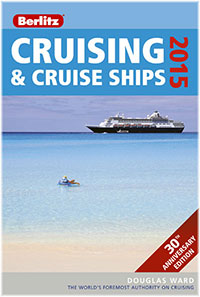 Douglas Ward, the long-time author of the Berlitz Guide to Cruising, has given Hapag-Lloyd’s Europa 2 the highest score ever in the guide's 30 year history.

But a recent travel story about the ship by a pair of Canadian writers reveals some of the, shall we say, unusual distinctions that impressed Ward. Things like dental floss and loose tea.

Writers John and Sandra Nowlan had afternoon tea on Europa 2 with Ward. "Look at this tea," he told them. "We each have an individual pot, served on a silver plate. The tea is loose, not in bags. That's just too much work for most cruise lines."

OK, that’s nice, for tea connoisseurs at least. Ward also told the Nowlans that little details are what makes Europa 2 stand out as the top cruise ship in the world.

"It's the only ship I know where you get a cleaning cloth for your glasses. And dental floss. That's special." Yep, that’s special. 5 out of 5 dentists would agree.

There’s no doubt the 500 pax Europa 2 is a special ship. All suites have balconies and are large by industry standards. Europa 2 also boasts more space per passenger than any other cruise ship.

The Nowlans brought their own criteria of cruising excellence, and were deeply impressed by the cereal condiments. “To our porridge we could add flax, chia seeds, amaranth, wheat bran, spelt or sesame, sunflower or pumpkin seeds. We've never been on a ship with so many choices.”

As the French say: ‘chacun a son gout,’ or ‘to each his own taste.’ To us, this story reveals the value of user-generated reviews, a la TripAdvisor or CruiseCritic. Read enough of them, and you get a picture of how a ship will appeal to your specific tastes. Read a guidebook or a travel story and you get one person’s opinion (or 2 if it’s the Nowlans), regardless of how well informed.

We’ll give the last word to Ward, as recounted by the Nowlans. "This ship does almost everything well," he said. "If I ask my waiter how the gravy is made, he can tell me. On other ships, the waiter just knows that it's brown.”