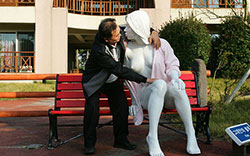 Taking a page from South Korea’s tourism promotion book, Taiwan is now planning to create a “Romantic Boulevard,” a sex and love-themed park spread over a 60km coastal stretch on the southern part of the island.

The Telegraph reports that the 10,000 sq. metre sculpture park will be modelled on South Korea’s Jeju Loveland park, a place where “art and eroticism meet,” where visitors can “appreciate the natural beauty of sexuality” and where “the imagination can run wild.”

Although still in its planning stages, “Romantic Boulevard” already has a scenic area set up for wedding portraits. Officials are also hoping to open a hotel next to the park for lovers who might want to “turn their feelings into action," said Shih Chao-hui, the Deputy Director of Taiwan's Southwest Coast National Scenic Area Office.

“We want people to fall in love with Taiwan as well as fall in love while in Taiwan. We hope to appeal to visitors in all stages of love. So we even plan to have a ‘Lost Paradise’ for those who are broken-hearted,” he added.

News of the proposed theme park has been met with mixed response, with one commentator on the local tourism office's website regarding it as “leading edge and refreshing,” while others - including the central government's own tourism bureau - fear the park could give the wrong impression of the country to foreign visitors.

“Taiwan is a romantic place and we are always looking for creative ways to promote it,” said Chi Yi-lin, a spokesperson for the bureau.

Shih believes the new park will help boost tourism and generate interest in the area, claiming he has already received several e-mail inquiries about its opening.

“Look, we are in the business of tourism, not education or religion, so the question should be, will the park generate business opportunities and we believe the answer is yes,” he said.