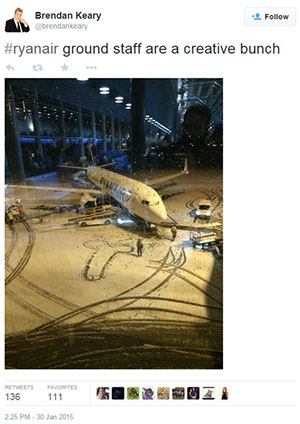 Brendan Keary captured their lewd effort on the runway at DUB and did what you do when you see something strange these days – he posted it on Twitter.

The somewhat anatomically correct snow art design will be familiar to immature schoolboys (and not a few grown men) across the globe.

Other Twitter users also praised the effort. “Better than Banksy,” suggested one.

A spokesman for Ryanair, which has made great strides in recent months to win over families, offering a winning response to a potentially embarassing situation:

“While our ground crew excel at industry leading 25-minute turnarounds, art isn’t their forte, as they’ve clearly forgotten to draw wings on their snow airplane.”