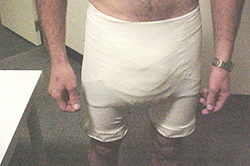 Officers selected 2 Brazilian men, aged 23 and 26, for a baggage examination after they arrived on a flight from AKL on 04FEB. “During the examination, officers noticed an abnormal bulge located in the vicinity of the 26 yr. old’s groin and a frisk search was conducted, which allegedly revealed a concealment of cocaine,” the ACBPS said.

The other young man is also alleged to have been carrying an amount of cocaine, revealed after a search. The report doesn’t mention where on his body the second genius had stashed the drugs.

Ikin didn’t say as much, but shoving large quantities of cocaine down your pants probably didn’t give the border agents much of a challenge.