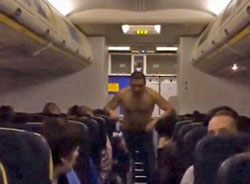 OK, we know it’s hardly news that pax behave badly on airplanes, with the frequent result of costly and inconvenient flight diversion. We don’t run all these stories, partly because there are too many of them, partly because they are often sad and pathetic, when we’re aiming for funny.

But the description by eGlobal Travel Media of video evidence of the latest inflight idiot as a “weird, shirtless grunter” got our attention.

On an FR flight to DUB from RIX, a man stripped off his shirt and began grunting, flexing his muscles, leaning on seats and punching cabin walls. Watching the video, it’s like a strange ballet performed by the Incredible Hulk.

Fellow pax eventually stepped in to restrain the man, belatedly assisted by flight crew. The man’s weird behaviour forced the flight to make an emergency diversion to Denmark.

The whole strange scene was filmed – even though the airline was desperate to avoid that happening – FR has a reputation to protect after all. The only in-flight announcement made during the incident doesn’t refer to the odd behaviour, or to the scrum taking place at the rear of the aircraft. Instead, the announcement warns pax that video or camera recordings are not permitted aboard.

The Daily Mail quoted Peter Hallstrøm of the East Jutland Police saying: “A plane was diverted because of a drunk person, so we had to arrest him. He was uneasy on board the aircraft, and the staff could not handle him.”

The video ends with an FR flight attendant (and Harry Potter lookalike) sternly telling the videographer to put their phone down (NOW!). Still, the video made it to YouTube, where it has close to 300,000 hits.