The poster by the Medical Tourism Association appeared in the female washrooms in several U.K. motorway service stations and shopping centres. It said: "Did you know ... 'Boob job' is the most popular cosmetic procedure for women." The message was augmented with simple visuals that conveyed that it was a procedure for breast enlargement.

It then stated: "Malaysia is proud to be amongst one of the only countries within the region where medical tourism is promoted by the government. Hence medical tourists can have the assurance of quality care and be guided by the regulation, safety standards and the governing laws within this industry. Our private hospitals bagged 3 out of 9 awards at the international Medical Travel Awards 2014."
Bagged? Really? Were they silicone bags?

The Advertising Standards Authority (ASA) was called in to investigate after a complaint that the poster was socially irresponsible because it trivialized cosmetic surgery by suggesting it could be incorporated into a holiday.

The advertising standards group said the ad was not likely to be interpreted as promoting a holiday, but agreed that it could trivialize a serious surgical procedure. It found the ad breached the code for responsible advertising and took the firm stance that it should not appear again in its current form. 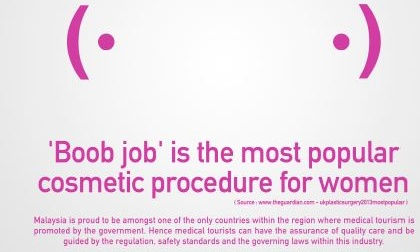