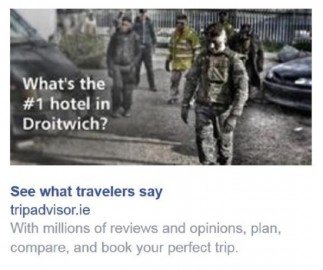 Would a photo of staggering, blood-smeared zombies encourage you to visit the small U.K. town of Droitwich?

Well, it probably would attract some, but it’s not exactly the kind of advertising the town was looking for. That’s what it received, however, in an ad produced by TripAdvisor.

Home to 20,000 people in the county of Worcestershire, Droitwich would like to be known for its Roman origins, “cobbled high street and packed festival calendar.” But, a recent online advertisement on TripAdvisor had the rather unfortunate image of zombies walking about in a rather bleak landscape, decked out in military uniforms and appearing set on terrifying residents and visitors. The ad’s caption: “What’s the #1 hotel in Droitwich?”

The matter was brought to the attention of TripAdvisor after triggering some less than happy reactions on social media.

TripAdvisor says when it highlights a particular destination it often uses an image of a local hotel, restaurant or attraction already featured on the site. In the case of Droitwich, TripAdvisor says, one of the highly rated things to do in the area is take part in a “Zombie Boot Camp.”

The official continues: “Upon further review, we recognize that this image may confuse some consumers, so we are working to select a new image for any future advertising featuring Droitwich.”

We wonder how much further review that took?