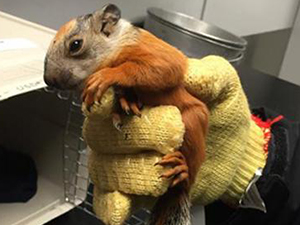 U.S. Customs and Border Protection apprehended a baby squirrel on Wednesday after discovering the tiny critter had stowed away in the pax cabin on a flight from Costa Rica to Houston.

The squirrel kept a low profile during the flight. Airline employees didn’t spot the animal until after pax had deplaned at IAH, according to a news release from Customs and Border Protection.

“During the course of performing our mission, we may encounter unusual opportunities to aid in the capture of seemingly harmless animals that have hitchhiked into the country,” said Port Director Charles Perez, according to the news release. “While there is a cute factor here, realistically, we understand that animals must be handled carefully.”

An agency agriculture specialist boarded the plane and "caged the squirrel without incident" with assistance from an officer.

The squirrel was apparently an unaccompanied minor travelling without documentation. Despite its rogue status, the unnamed rodent was not charged with a crime.

Customs and Border Protection turned the squirrel over to the U.S. Fish and Wildlife Service. Its future travel schedule is unknown at this point.