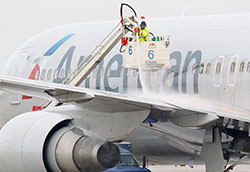 The severe February weather patterns slid on into March across some of the U.S. south where freezing rain and heavy snow encased parts of Texas and Oklahoma for a 2nd consecutive day. 1,000 flights were cancelled Saturday and many more were delayed at DFW, one of the nation’s biggest airline hubs.

The Saturday chaos came on top of about 600 flights abandoned Friday, forcing about 5,000 travellers to spend the night at the airport, which provided cots, blankets and toiletries to pax and kept concession stands open overnight.

But it was perhaps the pax on an AA flight from DFW to OKC that had the worst time. The flight that typically takes about 1/2 an hr. ended up being a 9 hr. journey.

“We apologize for the frustrating experience,” American spokesman Matt Miller said. But Miller was quick to point out that the period of time that the jet was delayed on the tarmac waiting did not exceed 3 hours – the legal maximum.

The flight, with 110 pax and 5 crewmembers, pushed away from the gate around 1:45 p.m. Friday but returned to the terminal amid de-icing delays, Miller said. Pax were allowed to exit, remaining in the gate area while crews also dealt with an air conditioning issue on board. But, the delays kept creeping due to aircraft mechanical issues and flight crew maximum time on duty and who knows what else.

Apparently some pax didn’t take the lengthy delays too well and resorted to kicking seats, raiding the plane’s liquor cabinet and shouting expletives.