Hard Rock Hotels & Resorts: Where All In Means All In 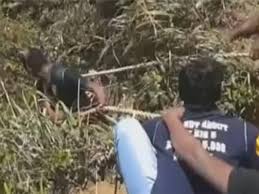 A honeymooning Dutch couple narrowly avoided the "till death do us part" portion of their wedding vows, after the groom backed up one step too far when taking a picture of his new wife.

The Sri Lankan military rescued 35 yr. old Mamitho Lendas, who fell from the country's World's End cliff – a 4,000 ft. behemoth. But he became the only known person to survive a tumble from the precipice when a tree broke his fall somewhere around 150 ft. from the top. (That’s still like falling from a 15 storey building.)

Lendas told the BBC, "I was making pictures and I had a misstep, and I fell down, backwards, 2 times."

Lonely Planet's entry on the attraction warns that there are no safety rails in place and states that some have lost their lives at the cliff, located in Horton Plains National Park.

Sri Lanka's Hiru News reports the man clung to a tree branch until he could be retrieved; he described it as the "longest 3½ hours of my life." The rescue made use of ropes and 40 soldiers, some of whom carried the man for roughly 3 miles to a point where a vehicle could reach him.

The couple had arrived in Sri Lanka 6 days after their wedding. His bride told BBC she's "so happy" he's alive, and the couple expressed their thanks to "Kent from Canada," who apparently talked to Lendas throughout his ordeal.

Lendas was described as in "stable" condition by an official and is seen standing and talking quite normally in the BBC video.