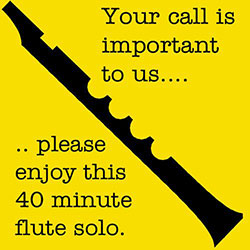 Renee Allen was determined to reach AA after her flight was cancelled due to winter storm disruptions in AA’s network. So determined that she stayed on the phone for 6 hours of elevator music and, no doubt, beseeching claims that her call was important.

But after 6 hours of frustration, the Kansas woman finally caved in and hung up after the carrier’s call centre didn’t answer.

According to Tampa TV station Fox13, Allen was booked Sunday to fly from Garden City, Kansas, to Tampa via DFW on AA. When icy weather hit the Dallas area, the airline sent her a text message notifying her that the flight was cancelled and automatically re-booked for a Monday departure.

American also gave her a contact number to call. So she did.

"They gave me a phone number to call, I tried to call several times, only to be told that the call volume was too much, and to call back another time. And then it would hang up on me," she told the television station. When she finally got through, an automated message came on and Allen said she figured “maybe 30 minutes, maybe an hour. Two hours into it, I realized this is crazy but I'm not going to give up.”

"This really was horrible customer service. I just could not believe that I could not get through," she told Fox13.

Allen made it to Tampa on Monday. Responding to inquiries from the TV station, AA offered this statement:
"We apologize for the frustrating experience. It was a very challenging weekend due to extreme winter weather impacting the Dallas/Fort Worth area. American had more than 2,000 weather-related cancellations system-wide on Saturday and Sunday. We also had extended wait times in our reservations system and social media channels. We worked to re-accommodate customers as quickly as possible based on their individual travel plans."

Oh. That’s all right then.