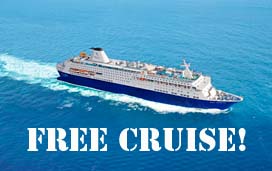 How many times have you picked up the phone or opened mail and learned the wonderful news that ‘You’ve won a free Caribbean cruise!’ Probably enough times to know that it’s not the prize they make it out to be. South of the border, the scam has been taken to new lengths.

Caribbean Cruise Line Inc. made billions of robocalls illegally disguised as political surveys to sell 2 day Bahamas cruises, a lawsuit by the Federal Trade Commission and Ohio attorney general's office says. Telemarketers working with Caribbean Cruise Line Inc. called as many as 15 million people a day, promising them cruises if they completed a short political survey, according to the suit filed by the FTC and 10 states.

The cruise line and its telemarketing partners cooked up a bizarre scheme to throw both consumers and law enforcement off its trail, the suit says.

The companies violated those rules when it robocalled people between October 2011 and July 2012, when angry consumers filed a class-action lawsuit against the cruise line, the FTC's lawsuit said.

People who received the calls heard a recorded request from "John of Political Opinions of America," who said they had been "carefully selected" for the 30 sec. survey. When they completed it, they were told, they could press "1" to receive a 2 day cruise to the Bahamas.

People who tried to claim their ‘prize’ were patched through to representatives from Caribbean Cruise Line, who told them the cruise would cost them $59 per person in "port taxes" and then tried to sell them add-ons such as pre-cruise hotel stays and excursions.

The calls generated millions of dollars for the cruise line, the FTC alleges.

Caribbean has agreed to a $7.7 million settlement - but the bulk of that will be suspended once the cruise line pays $500,000. Two other companies, Linked Service Solutions LLC and Economic Strategy LLC, also agreed to settle charges they helped with the robocalls or provided sales leads.