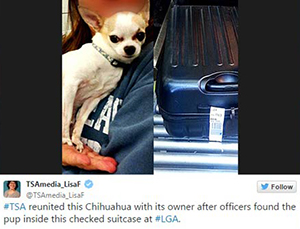 Maybe he was making a run for the border.

Transportation Security Administration agents at LGA have foiled a cheeky attempt by a passenger's pet Chihuahua to stowaway on a flight.

The pet apparently climbed into its owner's luggage during packing and wasn't discovered until a TSA checkpoint alarm was triggered. After opening the bag, agents found a live Chihuahua and tracked down the owner to reunite them.

The dog's owner was as surprised as the TSA officer who discovered it, saying she had no idea the wayward pup had hitched a ride in her suitcase. The woman called home and her husband came to the airport to pick up the pooch.

"An officer was shocked when he found a dog in the bag! Apparently, the dog climbed in while its owner was packing her suitcase," the TSA posted on its Instagram account.

"TSA worked with the airline to identify the owner, and the 2 were happily reunited. It's always important to double check your bags before travelling, especially to make sure your Chihuahua hasn't stowed away inside one of them."